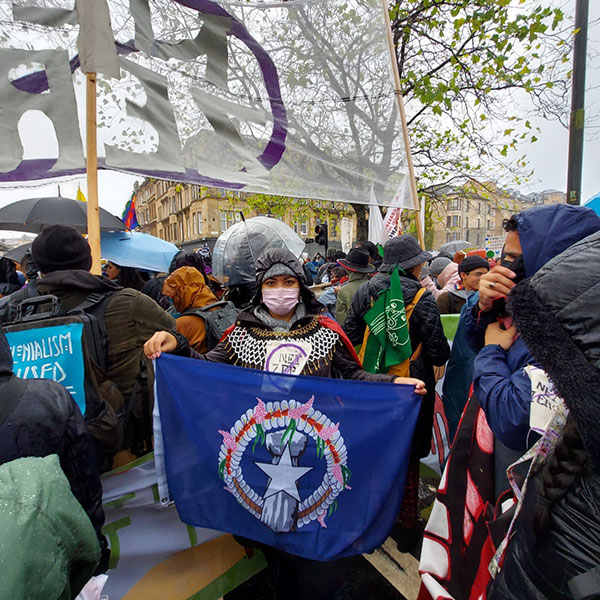 Days before introducing former U.S. president Barack Obama at the COP26 climate summit in Glasgow, Scotland, Rep. Sheila Babauta (D-Saipan), wearing a distinct lighatúttúr over her black puffer jacket, was already getting her message across loud and clear—“It’s time to decarbonize. It’s time to decolonize and it’s time to demilitarize.”

The CNMI legislator took to the streets with the indigenous community, and spoke before a crowd of demonstrators at the “Stop War, Stop Climate Chaos” anti-war rally in downtown Glasgow, where the United Nations climate change conference is taking place.

“The military has desecrated sacred land,” Babauta said. “We have one of our islands used solely for military activities and training. Our local people have no access to this island for almost 100 years. The military has poisoned our waters and has killed and threatened our marine mammals and wildlife.”

Babauta was referring to Farallon de Medinilla, an uninhabited coral island, one in the chain of the Mariana Islands, used for years by the U.S. military for its training and bombing exercises.

“The U.S. military is the single largest consumer of fossil fuels and the largest polluter on Earth. War causes warming and we must address militarization if we want to address climate change. We must hold the U.S military accountable and quit making exceptions,” she said.

COP is the annual United Nations climate change conference where leaders and major players from around the world come together to discuss climate actions, as well as on how to collectively address rising sea levels, carbon emissions, and the overall climate change issues that are happening globally. 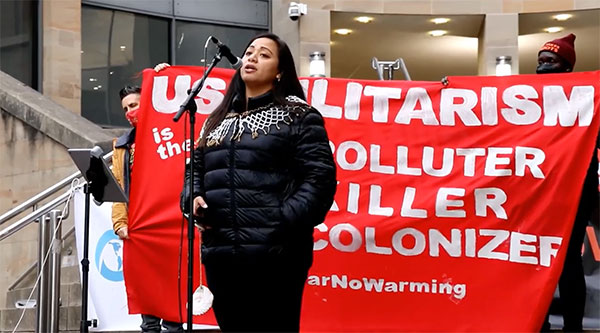 Babauta is in Scotland with the It Takes Roots delegation, an umbrella of indigenous alliances all over the world, the movement of which began during the Peoples Climate March in 2014, and which has since been present at international climate justice mobilization events.

Saipan Tribune was able to interview Babauta right before her Obama introduction, where she talked about what the indigenous communities want out of COP26.

Hear the indigenous
“Indigenous communities want to amplify their voices here, because we are the frontlines,” Babauta said. “We face the brunt of the impact of climate change, and we also hold keys to the solutions because we are…connected to the land and the oceans. Indigenous communities are here to offer solutions and offer insight about the recommended actions.”

Babauta also said that indigenous communities, just like everyone else fighting for climate justice, want commitments—to funding frontline communities, to reducing carbon emissions, to building a system that holds the largest emitters of carbon accountable.

Marching in solidarity in the streets of Glasgow with the indigenous community through the It Takes Roots delegation, Babauta participated in the global day of action for climate justice. Banners screamed “Climate Justice = Landback, End CO2lonialism” and “Militarism is the #1 Polluter, Killer, Colonizer.”

“After being here in Glasgow for the past week, I have learned, from many other indigenous groups from Puerto Rico, the U.S. mainland—in states like New Mexico, about how the military has impacted their communities, has poisoned their waters, their lands, their soil, their air, and how it is very difficult to hold the military accountable for their actions,” she said.

This is something the CNMI knows firsthand, according to Babauta, with the islands having served a large role in World War II.

“We are still working with the military to clean up their mess. There is an increased militarization that’s happening right now,” she said.

The future
Babauta said the Marianas lives at an intersection of militarization, colonialism and climate change. “We can see that around us every day. The military buildup is happening, our shorelines are receding, and colonialism has been in the Marianas for over 500 years. We can see that in our culture, in the way our people think, and even speak our language. Our culture has been lost due to colonialism,” she said, adding that both demilitarization and decolonization “will only bring good” for the Marianas. 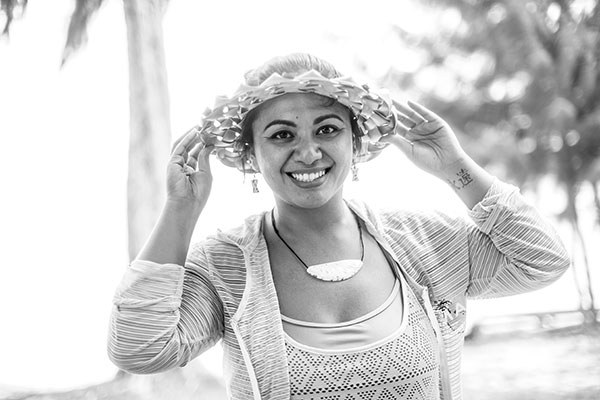 “It will empower our people, it will help us make decisions in the best interests of the people. We can utilize our natural resources to its fullest potential, where we can really focus on health, education, and protection of our natural resources,” she said. “Instead of using our lands and our waters for active military training—bombing and desecration of our sacred lands—we can instead fund more environmentally data-driven programs and agencies to study our natural resources so that it can be used for the advancement of humanity.

“Using our lands, our oceans, and our air for military purposes is not the only answer. There are many other ways we can utilize our space to advance humanity, to support science and support national security without having to sacrifice our health and our people,” she said.

When asked if we can expect legislations aligned with this to come in the future, Babauta said yes. The legislator also said that part of the reason she is in Glasgow is to gather resources—knowledge, commitments, and connections—that would be useful for the people of the Marianas.

“Moving forward, climate action, climate justice is definitely going to be a huge part of the conversation returning from COP26. We don’t talk about climate change in ways that we must prepare ourselves enough. We don’t talk about it enough in the CNMI. It’s really important for us to do future-oriented work, because it’s not just about today, but it is also about tomorrow.”

And as the youngest member of the Legislature, Babauta also extends her gratitude to the youth—the future of the CNMI—encouraging the community to embrace this youth enthusiasm and to support their passion in raising awareness about climate change.